We received the following extract from the Bear of Rodborough CC Newsletter.  Caroline is a past student of the Croquet Academy. 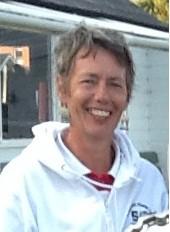 It has just been announced that Caroline has been awarded the Croquet Association’s prestigious Steel Memorial Bowl. This award is made annually to the most improved female player in the country. We nominated Caroline at the end of last season but had no idea of who else may be nominated so it has come as a wonderful surprise to hear this news. The nomination we presented read:

She entered the Cheltenham Class tournament in July; (cont)

After these and other club matches her handicap came down to 8 by late August.
At Cheltenham Croquet Club this weekend, she won the D class club competition.

She has also played in club competitions at The Bear and has played in fixtures in the South-West Federation leagues.

Caroline will have to wait until the CA AGM in October to receive the award but in the meantime, we can all celebrate her amazing progress and wish her continued success in 2014.